There is hugely exciting news for PES fans. PES Remastered has been confirmed for the end of 2018. There has been building anticipation of a PES Remastered game over the last couple of years. Specific details currently remain sparse but the news of a confirmed PES Remastered game will be met with unanimous praise from the PES community. We were able to uncover a leaked screenshot which shows notable improvement in graphics. 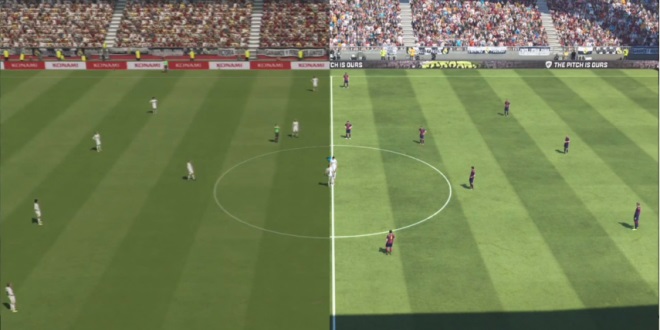 No details for the game came with the announcement and as a result we can start speculating what a PES Remastered game will entail. It will be interesting to see if classic game modes such as the original Master League would be included. These modes could even be enhanced to include online versions of them.

Which Game will PES Remastered be Based on?

Firstly there is the question of which PES game from old the remastered version would be based upon. There are a host of classic PES games that could be selected. Any of the below would be great options.

The leading candidate from the PS2 era has to be PES 5. This version of PES is revered among hardcore PES fans and received very positive reviews. Even to this day some PES fans consider this the most enjoyable game to date. However, this is a game from more than a decade ago. Therefore even in a remastered form it may not stand the test of time as nostalgic memories may be putting the game on a pedestal. Even so if it were announced that PES 5 would be receiving a direct remaster then we bet the news will be met with glee.

PES 2008 was the first PES game to be released on both the Xbox 360 and PS3. The improvement in graphics between the generation of consoles was substantial. Since then though graphics have continued to improve at a rate where even full HD football games have the scope to be remastered to today’s standard of graphics. PES 2008 also offered the classic end to end arcade style of football game which made this version popular. The gameplay could be rigid at times and being unable to skip animations in breaks of play was frustrating. Nonetheless we’re willing to bet PES fans would be more than happy to see a remastered version of PES 2008.

PES 2009 seemed to be a refined version version of PES 2008. It was a slightly faster paced version with an emphasis on dribbling. Annoyances such as being unable to skip breaks in play were rectified also. Most importantly PES 2009, much like PES 5 and PES 2008, maintained the classic arcade feel that created the hardcore PES fans.

We did say the release date had been penciled in for the end of 2018. Unfortunately this isn’t true because this article is an APRIL FOOLS JOKE. Sorry to get your hopes up PES fans. Hopefully this prank will induce a little bit of hype about a potential PES Remastered game though. If a new game doesn’t materialize then maybe the classic PES games listed above, among others, will become backwards compatible on the Xbox One. If you have any thoughts on a remastered PES game let us know on our social media channels. You can check out old classic PES games here: https://pesmyclub.com/old-pes-games/