When PES 2019 was initially revealed there was a promise of new authentic leagues. Two weeks later and we have 7 PES 2019 leagues announced with a further two promised. Konami may have lost, or forgone, their Champions League license but appear to be making every effort to make sure PES 2019 has not only new, but exciting licenses. The following PES 2019 leagues, which include fully licensed leagues and teams, have been announced:

The Russian Premier League is exclusive to PES 2019. 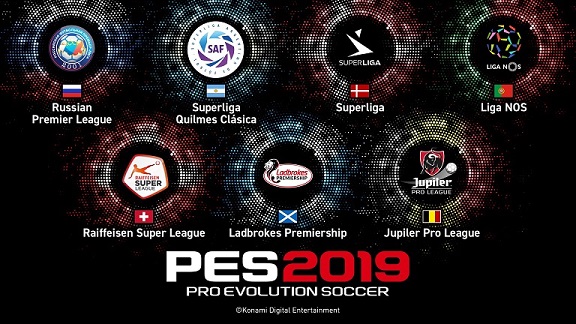 On top of these 7 leagues Konami have stated that there will be new partners clubs and stadiums added after launch. Interestingly in the history of all PES games it is only the Argentinian Premier League (Superliga Quilmes Clasica) of these leagues that has been fully licensed previously. This league was fully licensed in PES 2014 and PES 2015. The rest of them have yet to be fully licensed until now. This should add further excitement to the release of PES 2019. PES fans views on the announcement and guesses as to what the other leagues can be seen on our Facebook post below.

What Could The Other Two Leagues in PES 2019 be?

Speculation is rife in the PES community about as to what the two remaining leagues in PES 2019 will be. Given we are still in the early stages of the PES 2019 build up many think Konami are leaving the best till last. This would make sense but if incorrect and it is two smaller leagues this will now cause disappointment. Our opinion is that they will be noteworthy leagues given the hype the remaining leagues are being given. That leaves the question what leagues will they be? A lot of PES fans are guessing it will the Bundesliga. However this isn’t possible as EA have exclusive rights for Bundesliga and Bundesliga 2 until 2022. Similarly, EA also has exclusive rights for the Premier League until the end of the 2018/19 season.

There are whispers going around that it could be the Turkish Super Liga. Turkey’s premier division will be featured in FIFA through to FIFA 20 but EA do not have an exclusive license. It is also a league which hasn’t featured in PES before.

Another potential league is the Chinese Super League. China now boasts superstars such as Hulk, Oscar and Alexandre Pato who would be welcome additions to PES 2019. The league also offers the incentive of tapping into the Asian football market.