myClub has been the vocal point of PES for the last couple of years now. Still in its relative infancy it has made great strides alongside Ultimate Team and is actively thought about on the same level, a testament to the quality of PES and the mode myClub. Despite initial success and praise this doesn’t mean it is the finished product it needs to be. In fact there are glaring flaws in the game which need to be addressed. We discuss how PES 2017 myClub can be improved in PES 2017.

The hotly contested question for myClub moving forward is whether the game should evolve to a transfer system rather than the current system of getting random players through agents. Whilst it is hotly contested and PES fans have strong opinions either way the current feel is that most would prefer the transfer system. Given the title of the game mode “myClub” this would be fitting. Naturally a transfer system would allow you to tailor your team to exactly how you want it and allow you to play with players you have special affection by simply saving up GP/myClub coins. On the flip side, some fans express concerns where if a transfer system were to be implemented then it would become too much like FIFA Ultimate Team. Ultimate Team has been very successful and is clearly very popular so including some of its more positive features would not necessarily be a bad thing. If players are priced correctly it would be extremely difficult to get multiple world class players and therefore exploit the game mode. Unfortunately in PES myClub 2016 it is far too easy to get a world XI. It is understandable why Konami have made top agents so readily available (often for free). In the short term it encourages players to move over to PES but in the same breathe it is frustrating long term users and forcing them to search for alternative game modes as playing a world XI constantly becomes tiring and repetitive. For those wanting to argue against a transfer system, the current system offers a welcome element of randomness. If Konami can implement a transfer system whilst keeping the randomness that a lot of users crave, they may just be able to keep both sides satisfied! 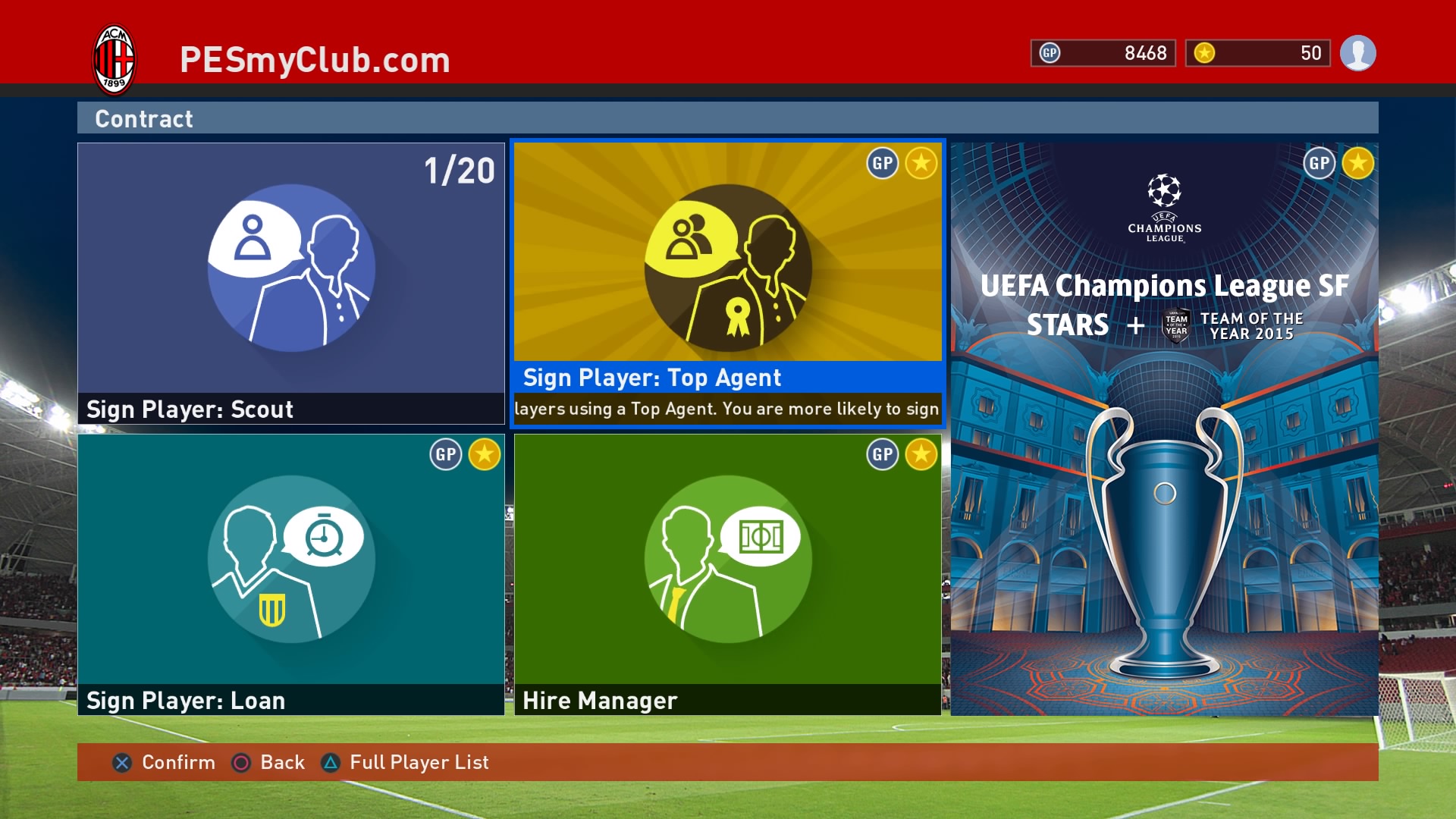 Another feature of myClub which is vastly different to Ultimate Team is the managers option. A user’s team’s strategy in myClub is purely based on the manager they select. This includes the main element, formation, as well team strategies such as pressure, positioning, attacking area, containing area and others. PES fans have shared their frustration with this as it does not allow any flexibility with your team. Before starting a game you are stuck with one strategy and formation which against some teams (where you need to alter it) is a big problem before the game even begins. Complete control over your team is a necessity. 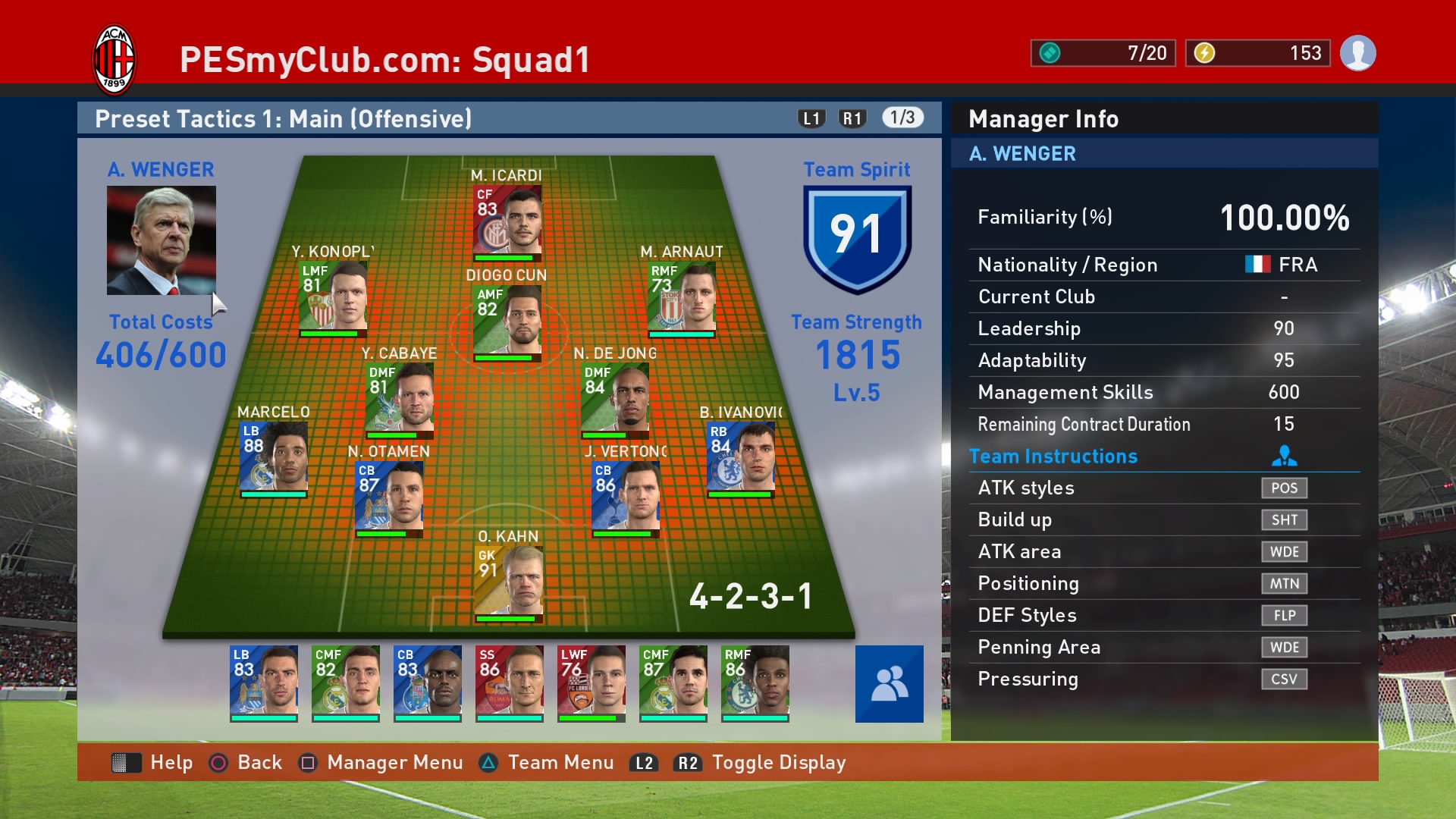 Team spirit in theory is an excellent concept. In PES 2016 realty it is has been implemented incorrectly. This is another example of where Ultimate Team should be copied.

The current system simply requires you to match up player characteristics with that of your manager. For example if your manager’s pressuring is conservative then players who share this same trait will match well with the manager resulting in a higher team spirit. The other way to achieve higher team spirit is to simply play games with your players. If they don’t currently match up with the manager’s traits then if you play enough games they will. This defeats the whole point of team spirit. This is a flawed system because a real team’s spirit won’t necessarily increase over time; in actual fact it could be argued the opposite would occur where a team gets a boost early on. How many times have you seen a new manager introduced or a player on their debut excel? Allowing players to change their attributes over time by playing is also detrimental to myClub. It should not be possible to have a world XI, often with a lot of egos and individual players, and have a 99 team spirit. A world XI and high team spirit should not be possible to achieve at the same time. This would keep the game balanced and force players between choosing an overpowered technical team who won’t work well together (as they wouldn’t in real life) or having high team spirit with lesser powered players but who create a team chemistry.

This is one is pretty simple – reduce the loading time. Flicking between your game plan and the myClub main menu should not take 5 seconds a time to do so. “Establishing communications” can quickly become the worst two words for a PES fan to see.