Rendering information for PES 2015 has filtered into the public eye. It was announced on Konami’s Japanese website. Whilst both console will provide 60 fps only the PS4 with be able to render the game in 1080p, leaving Xbox One at 720p.

This will come as disappointing news to Xbox One owners. Generally, this has received negative opinion as the Xbox One is able to render FIFA 15 at 1080p. However, it could be viewed as PES 2015 is offering such advanced graphics that the limited Xbox One console is simply unable to handle it. This would mean we can expect the graphics on the PS4 to be quite stunning; this shouldn’t detract away from Xbox One because at 720p 60 fps coupled with PES’s attempt to max out the games visual effects, the game should still look amazing.

Adam Bhatti, PES’s European Product Manager, had the following to say which will still give hope for the Xbox One owners.

Hopefully websites keen to report 720p Xbox One issue pick this up: Image circulating has been taken down. Communicating with MS. Stay tuned 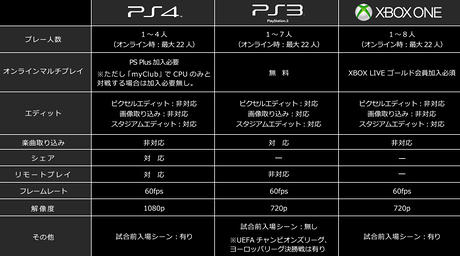