By this point I think we all unanimously agree that PES 2015’s gameplay is superior to FIFA 15’s.

PES 2015 is one of those games that, when you play it for the first time, is totally encaptivating because of the randomness and sheer rawness the gameplay would produce. Goals from different angles, tackles that you don’t know if are a foul a first sight and an unpredictable strategy from your opponent are all elements a new game can bring. Fast forward several hundred games and a lot of players feel that randomness has all but vanished. As is natural for most games if you play something enough the randomness disappears and you are left with a somewhat predictable outcome. Goals from similar angles, tackles you know the result of the instant they are made along with only one or two core strategies being implemented are now standard procedure in PES 2015. This is amplified in myClub where everyone’s team is annoyingly similar. With all that being said let’s discuss where PES 2016 can learn from its predecessor’s mistakes.

Overall shooting is one of the most pleasing aspects of PES 2015. It doesn’t have the feel of the bullet shots from PES 2009 or PES 2011 but nonetheless it still feels good to score. The only real gripe in PES 2015 is the repetitiveness and lack of variation in the shots you can do. The placed shot to the far post still has a too great of a success rate and similarly the near post success rate seems to be too low although the latter could just be because it is underutilised.

The places you can score goals from does seem to be fairly well balanced and realistic to real life. The only criticism regarding this would be when shooting from a specific area the same motion of save seems to be made a little too often. Different types of saves, i.e. parries, catching it, spilling it, mistakes and the keeper tipping it onto the bar/post would make for more captivating gameplay. Variation is king. 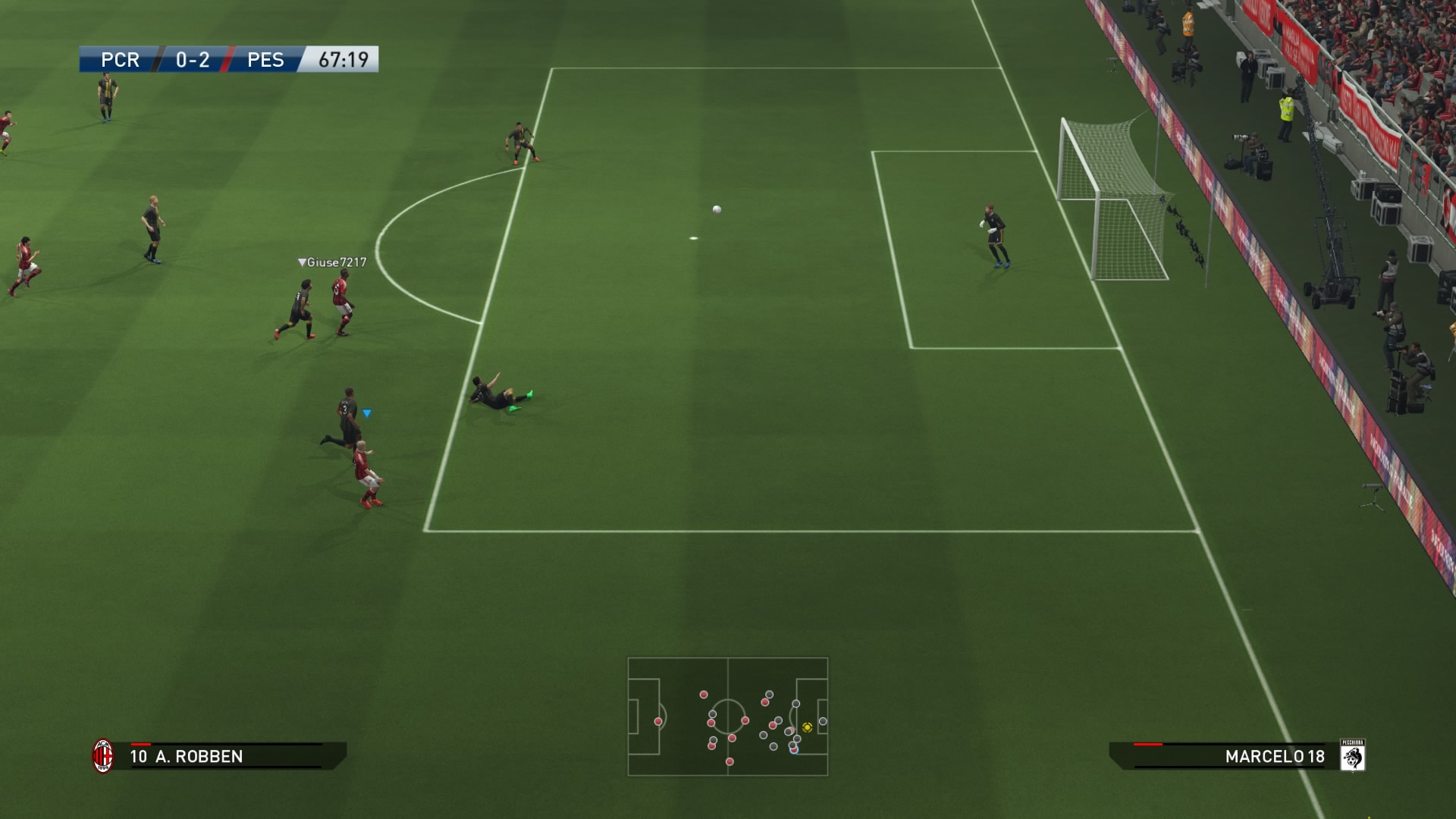 Credit to Konami for trying something different this season. The arrow showing where the shot is going attempts to create a different dynamic and brings back memories of FIFA 98 but unfortunately the free kick system has been exploited. Too many players have learnt how to score the same free kick over and over. An overhaul is needed for PES 2016 and using the free kick system from PES 2011 or PES 2013 as a base would be a good start. Another feature that has the potential to add some realism to the game would be switching between camera angles for the free kicks, i.e. when someone is shooting, the camera angle stays behind the ball for the entirety of the free kick. 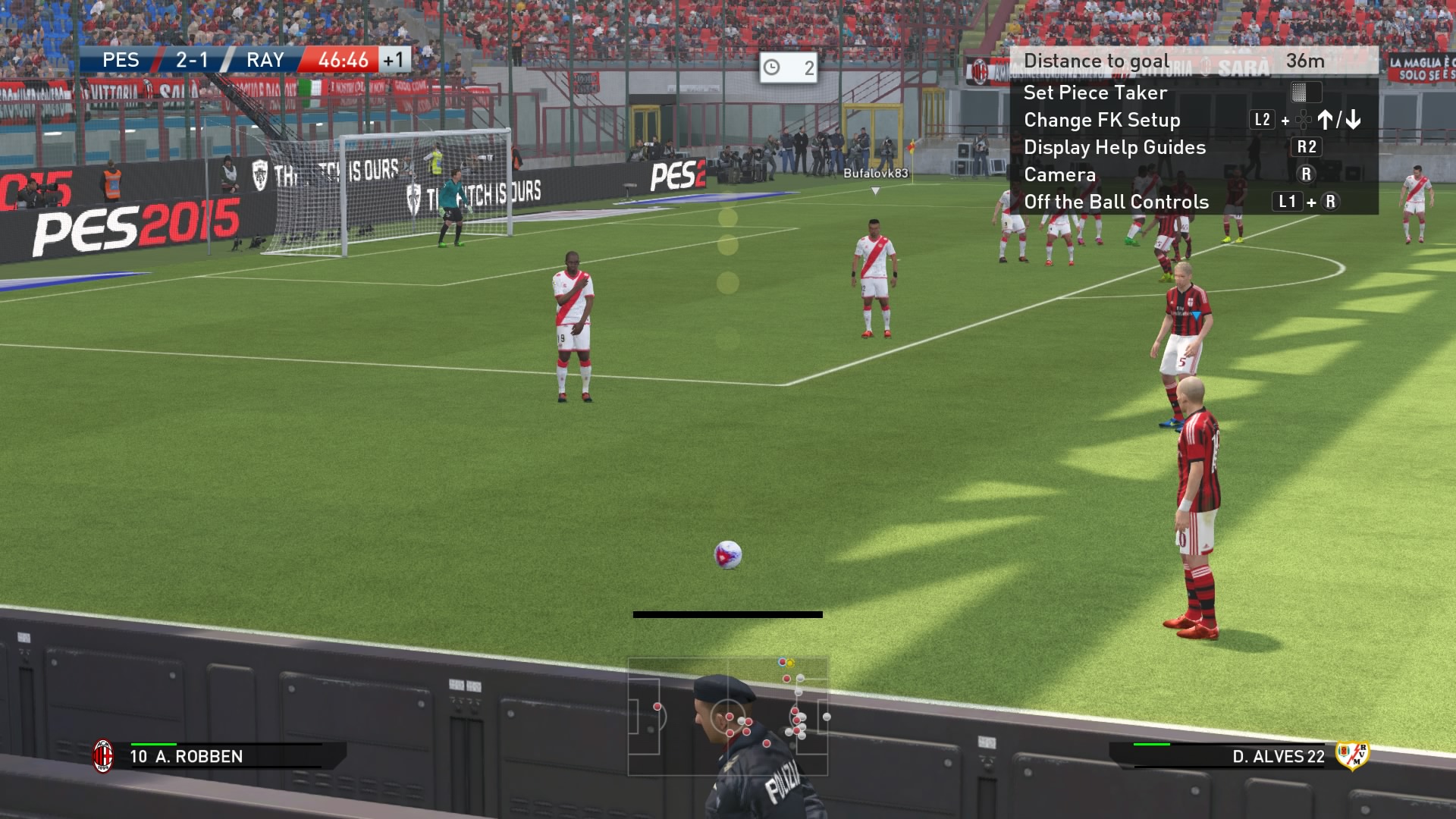 Once again credit to Konami for trying to introduce an effective unique system, in some ways they have nailed it. Having a fine line between putting it right in the corner or wide whilst mixing power of the kick into the equation simulates real life brilliantly. It adds the randomness fans crave (whether they know it or not) as well as making the players’ penalty stats relevant.

Regrettably however, there is one key flaw that completely spoils the realism of penalties and this is saving them. It is disappointing that once the penalty taker has selected which side they are shooting that the goalkeeper is then able to shuffle to one side and catch it. This is terribly unrealistic, goalkeepers should of course be able to move about but if that is the case then the penalty taker should be able to change their direction any time before the kick if the goalkeeper commits to one side. This isn’t to say the taker should be able to switch sides and smash it top corner but they should have the ability to cancel their current kick and put the most basic of pee-rollers into the other corner. Equally if the ball is chipped directly next to the goalkeeper, they should have the intuition to be able to move a single limb and stop it. Currently shuffling the goalkeeper side to side and completely guessing one corner is the optimum strategy as opposed to diving the correct way which often results in a goal anyway.

Corner kicks is an element that is very difficult to get right as it is so limited. Players have managed to semi-exploit this as they know exactly where to place the ball over and over to have the best chance of scoring. Other than adding the technique in which the ball is crossed into the box (drilled or floated) there isn’t a lot that can be added/changed. One feature that could be added to reduce frustration would be to make it harder for the best teams to score as they already have such an advantage and conversely give the worse and more attackingly limited teams a greater chance of scoring. This would of course contradict the target of realism but would create a more balanced gripping game. Not the end of the world as the worse teams tend to rely on set pieces against the bigger teams anyway! 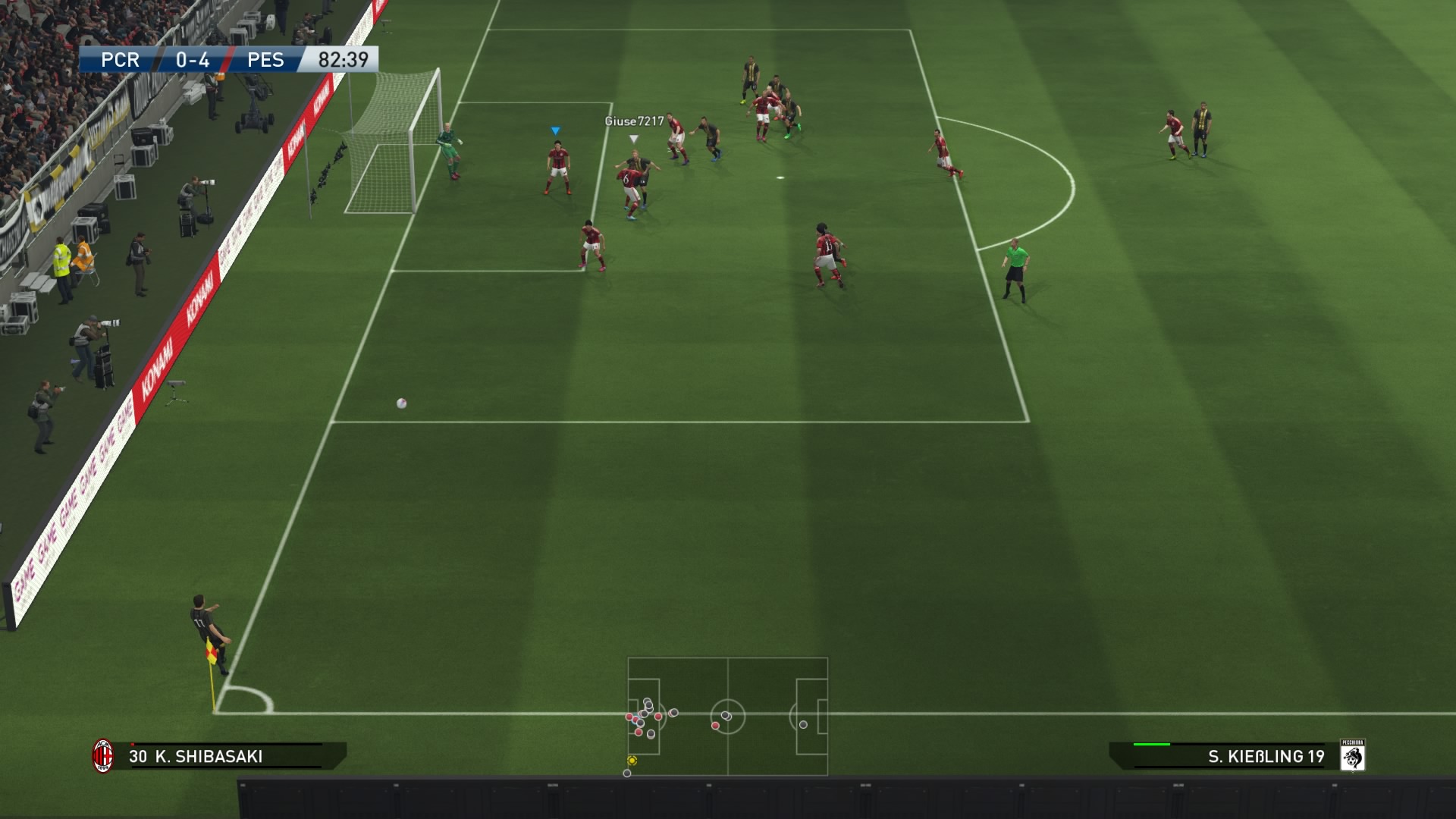 Passing – Pro Evolution Soccer’s main selling point; it is a struggle to think of a version where it hasn’t been on point. The passing feels good, varied, balanced and rewarding all at the same time. This applies to all: lofted passes, switches, through balls and one twos. On top of this a players’ passing ability accurately reflects what they are capable of which can’t be said for other attributes. We’ll keep it at that: a fantastic job for PES 2015, any improvements for PES 2016 will be a bonus!

Another plus point of PES, dribbling has always been exciting. This excitement is complimented nicely by authentic looking player motions whereby often, it really does look like the style of the player you’re controlling. Similar to passing, dribbling also reflects a players’ actual ability very well. David Silva is able to play his way out of tight situations using his exemplary close control whereas Bale/Ronaldo are extremely difficult to knock off the ball at full speed.

Unfortunately the current skill or ‘trick’ system is worse than it was in previous years. It is very difficult to implement tricks at all, let alone specific ones you want and this is frustrating. The most complex trick of all, the rainbow flick, is somehow the easiest to execute and is also overpowered. PES 2013 without a doubt had the best skill system. Within the player controls you could assign a trick to each direction on the analog stick whereby holding L1 or L2 (depending on your controller setup) whilst flicking the analog in the appropriate direction would execute the assigned trick. This was simple, effective and most importantly rewarding. Reintroducing this system would be a most welcome addition to PES 2016.

It could even be taken further if Konami were able to take specific tricks from players and create a players’ special skill button. Players like Navas, Ronaldo, and Robben could have ‘burst’ skills where they could throw the one step over or one jink which allows them to get a shot or cross off. Keeping with real life, the player would have to release the ball immediately after the trick as it would only give them a yard because they wouldn’t be able to maintain possession after the burst. 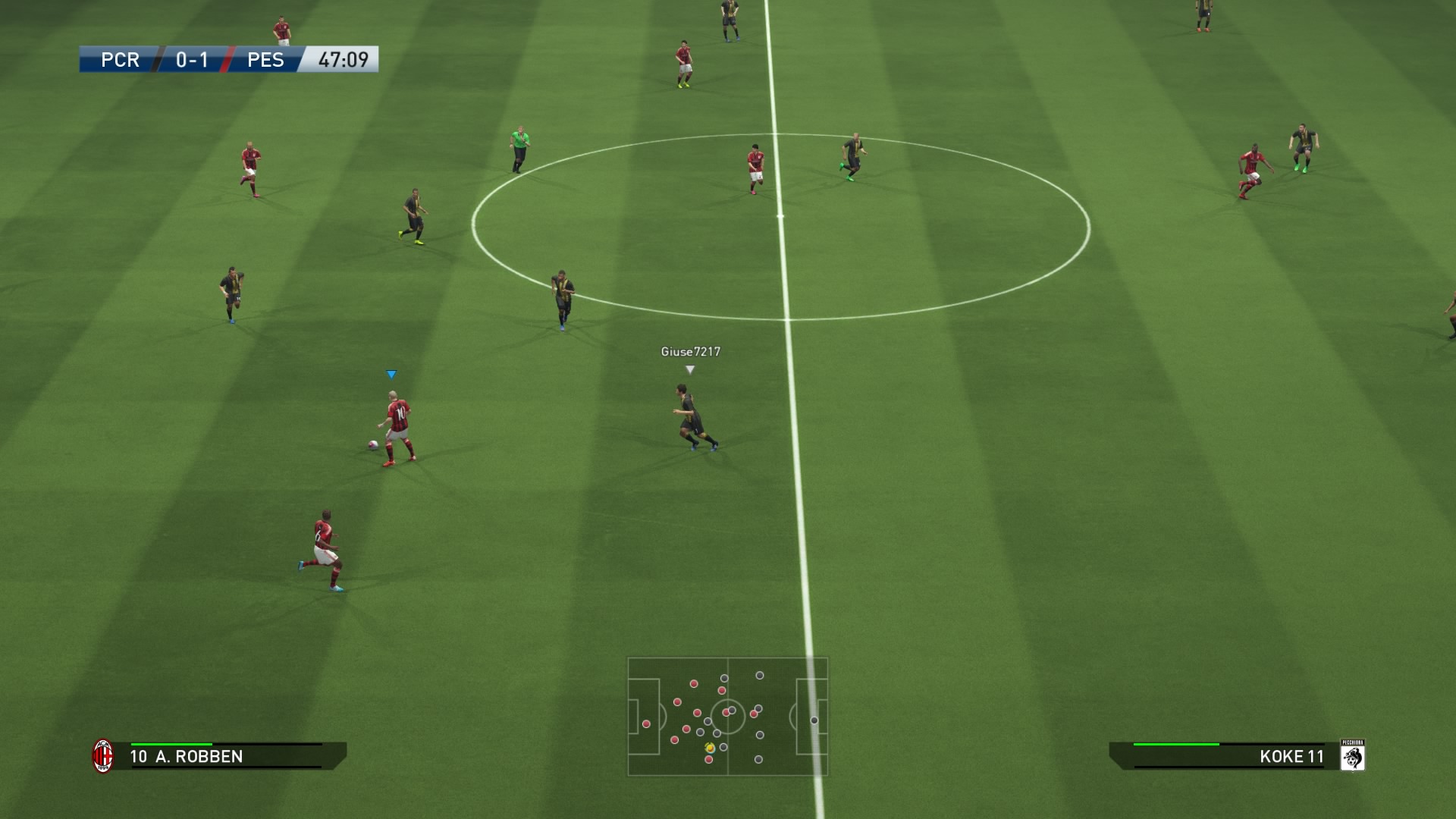 Staying on the theme of aspects of PES that Konami have nailed – tackling. They have produced a tackling system that is exactly it should be – effective, rewarding, devastating and random. Sliding tackles have a great balance between working and failing whilst at the same time having that coveted element of randomness which makes for exciting gameplay. The randomness element is fantastic; even now after 100s of games it isn’t possible to say with certainty what colour card a particular tackle will produce or whether it will even be a foul!

The conservative tackle (double tap pressure) is also good. The system rewards correct timing. The flaws with it would be sometimes the defenders miss unrealistically although this can be put down to the user not timing the tackle correctly. Also, the more elite players have a tendency to walk through these tackles which might be realistic to a degree but is infuriating when you are a modest team and up against Ronaldo.

Without a doubt the positives outweigh the negatives. Passing, dribbling and tackling all for the most part make the game very enjoyable. There are some minor adjustments needed to the shooting and set piece elements but the needed changes are pretty clear. The most important change would be the introduction of the PES 2013 trick/skill system which was superb and if it has been done before one would assume it would be relatively simple to implement again.

PES 2015 overall has produced riveting gameplay and if Konami can use this as a base to make PES 2016 even better myClub will be a joy to play.